“When we knew the twins were going to be born, all I could think about were the numerous complications that could occur, if they survived, which wasn’t even a sure thing,” shared Dr. Amy Schmidt of Women’s Health Specialists when she learned her premature twins were on the way at just 25 weeks, despite attempts to stall the birth with magnesium.

Rewind one week, when she had an ultrasound at 24 weeks.   “At that appointment, the doctor noticed my cervix was measuring a little short, which is a risk factor for preterm delivery, but I was feeling fine, so we weren’t too worried.”  However, that mindset changed drastically a week later when her cervix measured shorter yet, and upon being hooked up to monitors learned she was contracting.  “I didn’t feel a thing,” said Dr. Schmidt, “I felt completely normal up until the two hours before they were born.” 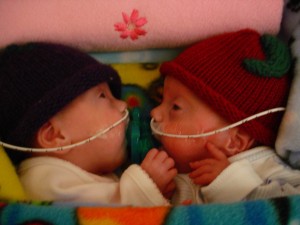 “I had a C-section because the first twin was breech.  I saw them briefly before they were taken to the NICU, and then I didn’t get to see them again for 12 hours, which was heart wrenching,” says Dr. Schmidt.  The twins were intubated right away, started on IVs and stabilized before being moved to the NICU, where they would spend the next three months.  “The entire time they were in the NICU was a roller coaster, and we were always waiting for something bad to happen.  It seemed like it was always one step forward, two steps back with their progression.”

“We were incredibly fortunate that there were no major complications during their stay in the NICU or long-term effects from their premature birth,” says Dr. Schmidt.  “They did experience retinopathy of prematurity, which required laser eye surgery when they were about 10 weeks old to prevent it from causing blindness.  They have yearly exams to monitor their eyes, and they both wear glasses for their near-sightedness; but they really have no other persistent issues.”

When it came time to bring the babies home, Dr. Schmidt and her husband were incredibly nervous.  “In the NICU they’re constantly monitored by machines, and that’s not the case at home,” said Dr. Schmidt.  “Even though the twins have an older brother, we felt like first time parents all over again, just checking on them all the time.”

“My advice to expecting mothers is to be diligent about your appointments and take care of yourself despite life’s distractions.  And at the end of the day, even if you are going to your appointments and taking care of yourself and doing everything right, you just can’t always prevent things from going awry.  If your baby is born early, don’t blame yourself,” concludes Dr. Schmidt.  “And these days, outcomes for preemies are so much better than they were 10, 20 or 30 years ago.  Having a baby in the NICU is scary, but the advances that have been made in caring for premature babies is amazing.”