Going Into Labor At 35 Weeks Pregnant

The March of Dimes organization defines premature as “preterm labor is labor that starts too early, before 37 weeks of pregnancy.”  With November being Prematurity Awareness Month, we thought it would be helpful to share patient stories of their premature birth experience, and what life is like today for their children.  Let’s start with Anna, a patient of Dr. Pfaffenbach: Anna’s pregnancy had been smooth sailing, despite the never-ending nausea.  “It had been a journey just to get pregnant, so I was just very thankful for the little baby growing inside me,” says Anna.  “Around 31 weeks I had a fall down the stairs and landed on my stomach, which was terrifying.  But I went to the hospital and everything checked out just fine – which was a huge relief.”

“Then at 35 weeks, I went to the bathroom in the middle of the night and my water broke, but only being 35 weeks I was kind of in denial and didn’t even call Dr. Pfaffenbach until the next day,” recalled Anna.  “Dr. Pfaffenbach said I should go to the hospital to confirm whether or not it was my water that had broken, and if so to see how things were progressing.”  Sure enough, Anna’s water had broken and she was 3 centimeters dilated.  “At 35 weeks the risks of stalling labor outweigh the benefits, so the decision was made to prepare for Anna’s baby,” said Dr. Pfaffenbach. 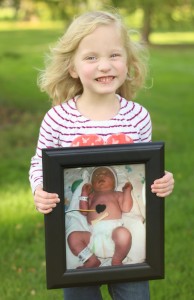 “All I could think when I learned that the baby was coming five weeks early was, ‘This isn’t real, this isn’t happening – it isn’t time!’ and just praying that our baby would be okay,” says Anna.  “And quite honestly, we weren’t prepared for the baby and didn’t have things set up at home for her – we were supposed to have five more weeks.”

“But she did come and everything was fine.  She was in a specialized nursery at ThedaCare Regional Medical Center – Appleton and didn’t stay in our room which was hard.  However, she didn’t have any real complications, and for that we were grateful,” says Anna.

Developmental delays have been minimal for Anna’s three year old daughter.  “She’s always been on the small side, has asthma and didn’t walk until she was a year and half old.  I’d say by the age of three she had developmentally caught up with her peers,” notes Anna.

“Something that was unexpected was how overwhelmed I felt after her birth,” recalls Anna.  “I really didn’t realize how bad it was and how much guilt I was carrying until my six week post-partum appointment with Dr. Pfaffenbach.  All of a sudden I just broke down crying, asking her what I did wrong to make her come so early.  She gave me a big hug and gave me all the reassurances I didn’t even know I’d needed the last six weeks, letting me know it wasn’t my fault and that I did everything right.” 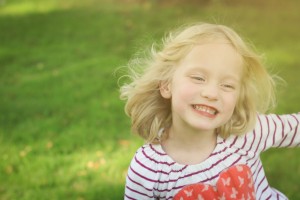 Dr. Pfaffenbach was so supportive throughout my entire pregnancy and after; she always told me like it was, which I appreciated,” says Anna, “And her nurse, Jan, was fantastic, too.  She always had time to listen to my concerns and was so compassionate.”

Anna’s advice to expectant mothers is to not close out the people around you.  “Having a preemie can be stressful because you’re so concerned about their growth and development, but I encourage other moms to ask questions, be open and most importantly – accept the help of others,” suggests Anna.